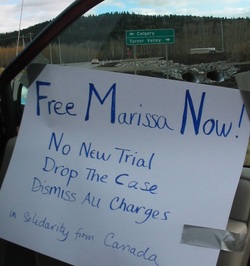 OCTOBER ACTION: DOMESTIC VIOLENCE <-> MASS INCARCERATION
October is Domestic Violence Awareness Month, and it is also the Month of Resistance to Mass Incarceration.  Marissa Alexander’s case shows us how these issues are connected. For October 2014, we called on anti-domestic violence activists and victim advocates, anti-prison/police violence activists, feminists, racial justice organizers, reproductive justice activists, survivors of prison and domestic violence, and all people who believe that #blacklifematters to join the movement to FREE Marissa Alexander!  More here: http://www.freemarissanow.org/october-action.html

BLACK WOMEN'S LIVES MATTER: HAPPY BIRTHDAY, MARISSA!
September 14, 2014 is Marissa Alexander's 34th birthday!  We are so glad that Marissa defended her life four years ago so we could celebrate her life this year. We urged her supporters to send donations as birthday gifts, and birthday cards to show support.  In solidarity with the uprising in Ferguson and all other movements to end racist violence, police brutality, and mass incarceration, Free Marissa Now also released a list of principles inspired by the politic, Black Women's Lives Matter, which we wrote for Standing Our Ground Week of Action. More here: http://www.freemarissanow.org/black-womens-lives-matter.html

#SelfiesForSelfDefense
Marissa's supporters tweeted and facebooked selfie photos that included messages of love and solidarity. The project helped to meaningful connect Marissa and her family to the community of hundreds of people who are pushing for her freedom.

STANDING OUR GROUND WEEK OF ACTION
﻿People organized in Jacksonville, Chicago, St. Louis, Phoenix, and around the US to redefine what it means for black women and our communities to stand our ground.  In Jacksonville, hundreds of national members and organizations collaborating with Free Marissa Now attended week-long festivities, including workshops, a mass march and rally, and the People's Investigation that brought the message, "Free Marissa," to public offices.  The Chicago Alliance to Free Marissa Alexander organized an art exhibit, teach-ins, and fundraisers to raise awareness.  Fundraisers and community discussions were held around the US in solidarity.  More here: http://www.freemarissanow.org/standing-our-ground-week.html

MOTHER'S DAY WEEK OF ACTION
Recognizing that Marissa Alexander is a mother of three beautiful children and, like many women, she has been forced to mother her children while incarcerated and under house arrest, we organized a Mother's Day Week of Action to bring attention to the connections between mothering, reproduction, mass incarceration, and domestic violence.

FREE MARISSA DJ
We launched the Free Marissa DJ project on February 10th, 2014, the third anniversary of Marissa Alexander’s incarceration.  People dedicated songs to Marissa Alexander and all people who have been targeted by domestic violence or prison violence. With each dedication, supporters sent a donation to Marissa’s legal defense fund to help her win a full acquittal in the new trial.

SHOW YOUR LOVE: FEBRUARY WEEK OF ACTION
February 8-16, 2014 was a week of action to Free Marissa Alexander. February 10th was the third anniversary of Marissa Alexander's incarceration, and on February 14-16, activists raised awareness about violence against women.  Actions included a tweet-in on twitter on the criminalization of women and girls, projects in Miami, Seattle, Pittsburgh, and Chicago, and the Free Marissa DJ Project in which people dedicated songs to Marissa and the movement to end domestic violence and mass incarceration.


WELCOME HOME, MARISSA!
We welcomed Marissa home for the holidays when she joyfully received a bond release the day before Thanksgiving in 2013.  Supporters sent Marissa and her family a seasons greetings card and holiday gift to her defense fund -- where she needs it most!

ANGELA COREY: DROP THE CASE!
After Marissa Alexander successfully won her appeal on Sep 26, 2013, Free Marissa Now mobilized people all over the world to send hundreds of letters to State Prosecutor Angela Corey urging her to DROP THE CASE against Marissa Alexander instead of going forward with another expensive and traumatic trial, forcing Marissa to defend her life again.

Angela Corey has stated that she intends to move forward with re-prosecuting Marissa and the new trial is scheduled for March 31, 2014.  However, Corey can still DROP THE CASE at any time!  Supporters of Marissa can still send letters to Corey, Governor Rick Scott, and Attorney General Pam Bondi urging them to do the right thing and drop the case as soon as possible.  Their addresses and a sample letter can be found here: http://freemarissanow.tumblr.com/dropthecase

#31forMARISSA
During the month of October 2013, Emotional Justice Unplugged, Chicago Taskforce on Violence Against Girls and Women, and Free Marissa Now launched a month-long multi-media letter writing campaign called #31forMARISSA. Throughout the month, men and boys from all backgrounds wrote letters of support to Marissa Alexander, sharing stories of violence experienced by women in their own circles, donated funds to her trial fees and become engaged as active allies in the domestic violence movement. Read more about the project at EBONY and visit this page for excerpts from the 31 letters that include links to the full letters.

HAPPY BIRTHDAY, MARISSA!
September 14, 2013 was Marissa's birthday and people all around the world organized events to celebrate Marissa’s life and the lives of all survivors of violence.  People organized rallies, parties, teach-ins, and gatherings to send Marissa birthday cards which helped spread the word about her incarceration and kept building the movement to demand her freedom.  More details here.  Also, Marissa's mother, Mrs. Helena Jenkins, sent a beautiful letter honoring Marissa's birthday and thanking her supporters. 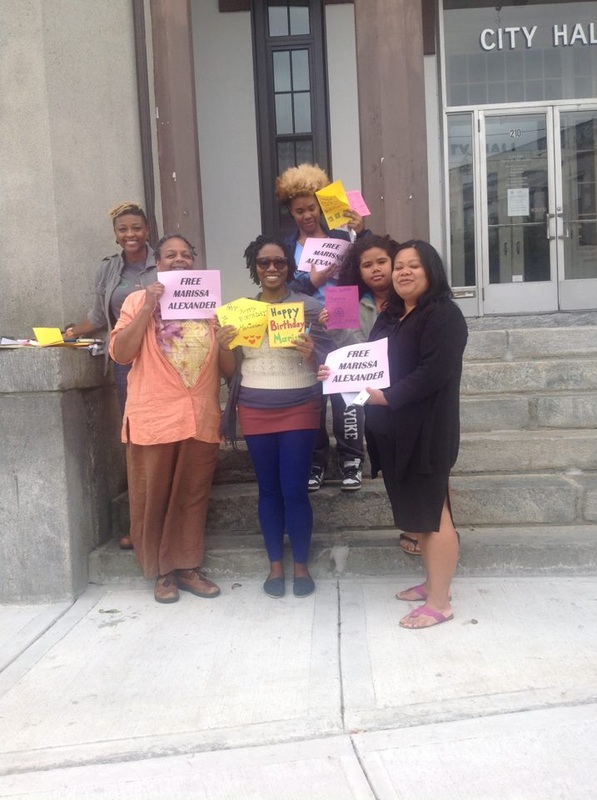