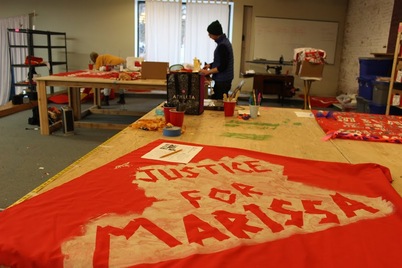 ​On January 27, 350 quilt squares containing stories from survivors of domestic violence and sexual assault will blanket the Duval County Courthouse lawn to protest the prosecution of Marissa Alexander.

Marissa Alexander is a survivor of domestic violence, mother of three, and a proud African American woman who is currently in prison for defending herself against her abusive husband. After serving a combined 3 years in prison, she faces a possible 5 more years to be decided at hearing on Jan 27. Four years ago, Marissa fired one warning shot that caused NO injuries to ward off a life-threatening attack.  Marissa should have never spent a single day in jail and the threat of her serving another 5 years is deeply unjust.

The #MonumentQuilt, an ongoing collection of stories from survivors of rape and abuse, will be on display at her trial on Jan 27 in protest of the prosecution of Marissa Alexander.  350 quilt squares containing stories from survivors of domestic violence and sexual assault will blanket the Duval County Courthouse lawn to let Jacksonville and the world know Marissa is NOT ALONE.

The public is invited to join the Free Marissa Now Mobilization Campaign and The Monument Quilt to support Marissa Alexander’s fight for freedom and express solidarity with all survivors of domestic violence. At the quilt display attendees will be able to view quilt squares, hear speeches, make their own quilt square and join in community.

"Marissa Alexander's supporters in Jacksonville are excited to welcome the beautiful Monument Quilt as a powerful demonstration of solidarity with Marissa and all survivors of domestic violence," said Aleta Alston Toure', a Free Marissa Now organizer based in Jacksonville.  "People all over the world have been part of this historic movement for Marissa's freedom. This quilt is an important creative representation of Marissa's broad base of support."

Supporters in Jacksonville are also invited to join The Monument Quilt and the Free Marissa Now Mobilization Campaign on January 26 for a quilt-making workshop.  From 3-6pm at the New Jim Crow Movement Office at 5 W Forsyth, second floor, survivors are invited to write their own stories and supporters can make a quilt square to support Marissa.  Quilt squares will be displayed the following day at Marissa’s hearing.

Survivors and supporters have already been creating quilt squares from across the country for the Jan 27 display.  Some of the quilt squares tell personal stories, while others call to attention the grave injustice and deep racism of Marissa’s case.

One quilt square reads, “How can the same state that aquitted George Zimmerman prosecute Marissa Alexander?”

One story reminds us what was at stake when Marissa defended herself: “My father murdered my mother in front of me and my brother.”

One quilt square reads, “My mom, my sister, my step-mom, my aunt, my aunt C, my cousin, my cousin M, my cousin C, my grandmother, my grandma, and my step-grandmother are all the women in my family that have been in abusive relationships (that I know about).  Marissa, you are not alone.”

The Monument Quilt display at Marissa Alexander’s trial will continue to draw attention to the deep injustice she has experienced, as a survivor of domestic violence and as a victim of the racist US legal system.  The Monument Quilt is a crowd-sourced collection of stories from survivors of rape and abuse. The Monument Quilt is a platform to not only tell our stories but work together to change how communities respond to rape. The quilt is creating a new culture where survivors are publicly supported, rather than publicly shamed.

Each individual square is made of red fabric with hand-written testimonials created by survivors, secondary survivors, and allies. Almost 300 quilts were displayed in 13 US cities in August 2014 and we will continue to display the quilt via quilt-making workshops, in public displays across the country, until a final, historic display in Washington DC.  Blanketing the National Mall, 6,000 fabric squares will ultimately be stitched together to spell “Not Alone.” To find out more about The Monument Quilt visit themonumentquilt.org.

The Free Marissa Now Mobilization Campaign engages people in the US and all around the world with projects that help support the call to free Marissa Alexander and organize towards ending domestic violence and mass incarceration. To find out more about the Free Marissa Now Campaign visit freemarissanow.org.