Marissa Alexander was scheduled for retrial at Jacksonville, Florida’s Duval County Courthouse on Dec 8th.  On November 24th, Marissa accepted a plea deal to go back to jail until January 27, 2015, followed by 2 years of probation and house detention.  We will continue this journey with Marissa until she is free.

Marissa fired one warning shot into a wall to prevent her husband from killing her days after giving birth to their premature daughter. The State Attorney’s Office, is pushing for Marissa Alexander to serve 60 years consecutively for three charges of aggravated assault, and despite no one was harmed. For this, she has already served almost four years in Duval County Jail and Lowell Penitentiary and now she is on restricted and monitored house arrest since November 2013. Many have said that Marissa should have killed her husband and she would not be going through this.  We know Marissa, the real person, is not the criminal she has been depicted as, which is why she did not kill her husband and father of her child.  Her faith has kept her thus far and thousands of people are praying, hoping, and taking actions for her freedom despite the unjust sentence before her.

People all over the world have been supporting Marissa Alexander and her family in a variety of ways: advocacy, fundraising, sending cards, rallying, and also prayer.  Each Wednesday since August 2012, supporters have offered prayers for Marissa, all victims of domestic and sexual violence, advocates, abusers, and the State Attorney Office too. We believe that prayer is powerful and able to avail much more than we can imagine.  We believe prayer will help set Marissa free.  Call 646-307-1300 code 633633# to join the prayers.

We are looking forward to the faith community day of prayer and action on December 6th.  Everyone, regardless of denomination, is welcome to join us at the Duval County Courthouse at 501 W. Adams Street, Jacksonville, FL 32202.  Registration will be open at 8a if you want to come early and the walk will be at 9a - 11a.  We will do walking prayers for the half-mile distance around the courthouse while we focus on Jeremiah 33:3.  The purpose is broader than the Marissa Alexander case and includes the many families across our nation that face the criminal justice system without receiving a fair process and justice. Our prayers are for change, for a more just system that operates without a double standard of law.

We invite all supporters, globally, to walk and pray or meditate wherever you are that we might see change in the patterns of oppression and abuse of power. The law should be carried out fairly toward all persons.

We also invite you to share your prayers and encouragement to families at #FMNJericho, #JerichoPEACE and Facebook.com/FreeMarissaNow

Pastor Annie Theresa Bryant Montgomery of Abundant Peace Ministries will lead the Jericho Prayer March on December 6th at 9a-11a EST at ground zero, Duval County Courthouse.  And, we also invite you to bring an unwrapped new toy for the holiday gathering at the Youth Extravaganza at Abundant Peace Ministries at 5p.—8p EST  at  Abundant Peace Ministries, 6859 Lenox Ave, Jacksonville 32205.  Toys for children will go to a local domestic violence program.  Youth will be talking about health, finances, and how to protect themselves.  Be there, God will be in the neighborhood. Pre-register for Youth Extravaganza at  abundantpeace88@yahoo.com by December 3. 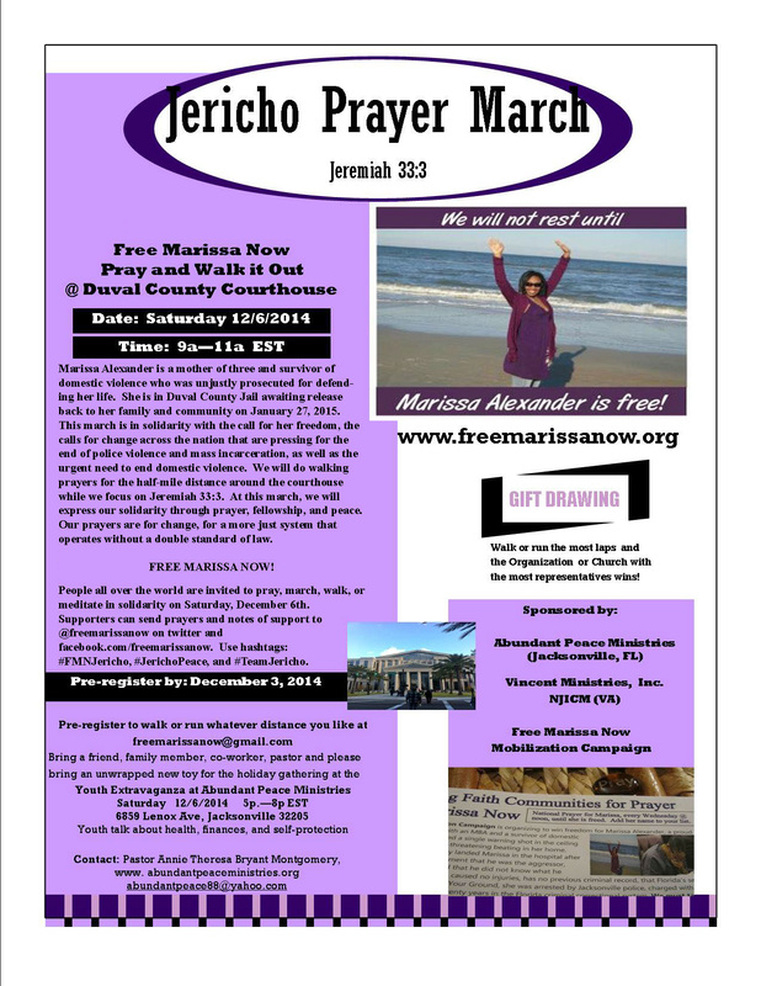