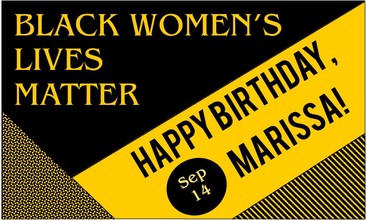 September 14, 2014 is Marissa Alexander's 34th birthday!  We are so glad that Marissa defended her life four years ago so we can celebrate her life this year. Celebrate her life with the following actions throughout the month of September:

Free Marissa Now is in deep solidarity with the uprising in Ferguson and actions all over the country that are challenging racist police violence and the prison crisis.  We urge our social justice movements to also prioritize the ways black women's lives are shaped by police and prison violence, including the fact that they are direct targets of police brutality such as murder, sexual assault, physical assault, and public humiliation.  As we have seen with Marissa Alexander's case, the crisis of policing and prisons can also entrench women's experience of domestic and sexual violence.

During the July 2014 Standing Our Ground Week of Action in Jacksonville, we organized our days based on the following principles that affirm a politics that Black Women's Lives Matter.  The full statement can be downloaded here (PDF).  A shortened version is below.

We believe that Marissa Alexander has the right to defend her life from both domestic violence and the violence of the criminal punishment system.  We believe that the ground on which black women stand cannot be defined through the terms of US law because US law is not designed to protect black women’s lives.  We are inspired and challenged by the 1974 Combahee River Collective Statement, which states, “Our politics initially sprang from the shared belief that Black women are inherently valuable, that our liberation is a necessity not as an adjunct to somebody else's but because of our need as human persons for autonomy.”  So we promote a political agenda that includes principles based on Marissa's specific political situation that is shared by many other black women, especially those who are criminalized survivors of domestic and sexual violence.  These principles describe black women's right to take up space and take a stand in defense of our lives.  This statement is a work in progress, so if you have feedback, please let us know at freemarissanow@gmail.com.

We believe that all social movement strategies, human services, community efforts, and activist practices should reflect these principles, and actively and unreservedly incorporate them into their vision and work.